From my last post, you may think that I was really taking it too far.
Yeah, I nearly lost my head because I was stressed out over some massive jam. The truth of the matter was that I've been stressed out for a very long time now.

Ever since an announcement from the HQ that each profit center was to hit 80% utilization, I have been stressed out every week to try to hit those numbers. Sure, revenue collection is not part of my KPI (Key Performance Indicator) but cost recovery from utilization rate of each member in the team; including myself.

I know that I shouldn't let stuff like this get to me, but the pressure is just getting too much. Every week, we're been asked by the boss - "Do you know what happened last week?", i.e. do you know why your numbers are so fxxked up last week? Sometimes, out of anger, I would like to answer back - "Sure, YOU fxxked up the numbers because YOU didn't bring in the sales!". However, I keep this all repressed inside, waiting for the moment when I'm excused from the meeting.

I'm a technical team lead - which means, I lead my team in technical aspects of a project. Somehow, the term is being abused by management because we have the responsibilities as a manager but yet - not really having the title. In fact, I feel like a pseudo-manager all the time now.

Anyway, enough of that.

I had a small revelation while at church yesterday. It happened when I was listening to the church's 50th Golden Jubilee song. A sort of calm and peace came over me as I concentrated on the lyrics of the song. That the greatest celebration was The Word - "In the beginning was the Word, and the Word was with God, and the Word was God" (John 1:1)

It was as though I had been touched by God's finger, i.e. like being poked (not Superpoked! like in Facebook), nudged to return my focus to Him. Sure, the world could be really screwed up at times and it can take it's toll on us; but there is so much more to life, than just work.

With that, I have a renewed sense of self this Merdeka. Yep, that means I've got to take whole of my anger and turn it inside out. Laugh a bit more, learn to breathe more deeply - to calm the mind and also to eat right!!

I'm getting the exercise thing down - by trying to hit the gym at least twice a week - up to 2 hours per session; but food is my biggest downfall and brick wall. Well, right now I'm having my low-fat yogurt and apple and I am resolved to get the food part of my diet right. It's so hard when Malaysian food is soooo delicious and you need a lot of will power to resist the lovely char koay teow or that fatty piece of bak kut in the bak kut teh.

However, thinking of all the saturated oils just gives me the heebie jeebies now. Yeck!! 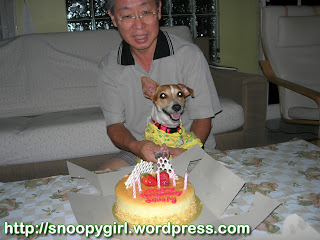 Snoopy celebrated her 5th birthday yesterday as well as our nation celebrated 51 years of independence. Both numbers are significant although one is larger than the other.

Just like Snoopy wishes for good things to come to her, I also wish for great things to come to our nation. Despite all the things which are happening now, we all wish and strive to make Malaysia the best she can be.

I pray that our leaders will wake up and remember that the job they took was provided by the rakyat. So, the rakyat is the boss.

I pray that our leaders will be granted the wisdom to lead the people and not lead their pockets.

I pray for continued peace amongst everyone.

I pray for the people of Sichuan, China who suffered another earthquake on Aug 31st.

That is my Merdeka wish. Happy Merdeka everyone!
Posted by Angie Tan at 9:40 am