Colleague 1: Pssttt.. Check your e-mail...
Me: ???
Colleague 1: Got damn good deal for Japanese buffet!! Looks like another Jogoya!!
Me: **shock** **opens e-mail...**
Wahhh... After reading the post from Precious Pea about Tenji @ Solaris, Mont Kiara, I forwarded the mail to a few colleagues as we were looking for a new place to meet up besides Rakuzen. We often meet up at Rakuzen for the Sunday "all-you-can-eat" lunch and to tell you the truth, we are a little "bored" with the menu. However, we love Rakuzen's Sencha ice-cream... **slurp** 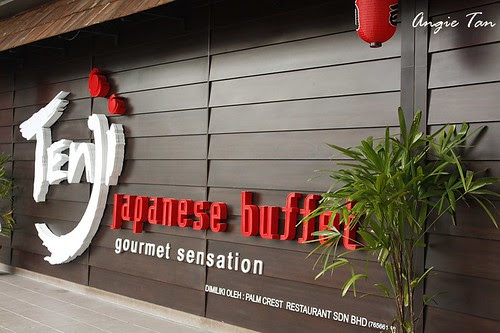 We noticed that there was a large crowd outside Tenji at 11:30am!! The buffet starts at 12pm and because of the lunch promotion of RM29.90++ (until 15th January), the queue started early. 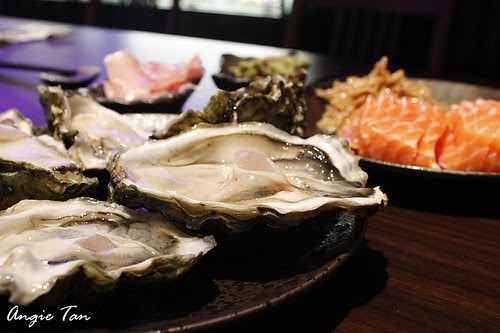 My colleagues divided up the labour very quickly. One got the oysters and sashimi - the other took loads of coconuts for everybody. The sashimi were very fresh. The food at this station emptied very quickly. Once the oysters were reloaded, there was a queue to grab the oysters off the crushed ice. 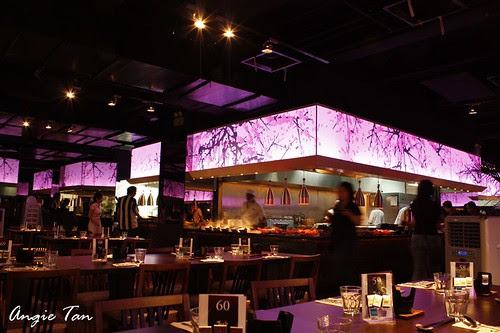 There were many different stations ranging from Western to Eastern as well as standard Japanese fare, i.e. Teppanyaki, Sushi, Sashimi and Soup/Soba. We did cover most of the stations in our brief 2 hour "mission" but I would have liked to have tried their cold soba noodles. 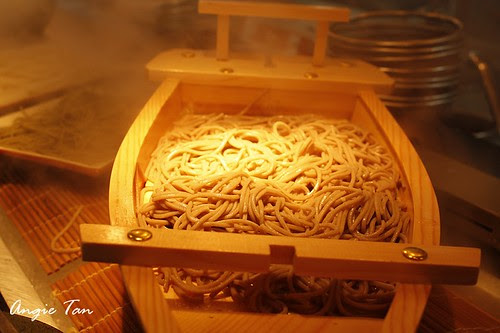 As we sat near to the Teppanyaki station, we ordered quite a number of prawns. In fact, I think I may have consumed my two months worth of prawns in 1 day!! (~.~) It was yummy but then, I have to watch my cholesterol levels! *sigh* 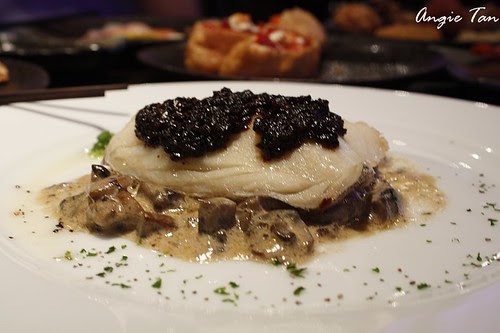 My colleague ordered this lovely cod dish from the Western station. It is steamed cod with a lovely bean paste and creamy mushroom dressing. I'm drooling just recalling the taste of this dish!
Of course, let's not forget about the desserts! There is a wide variety to choose from but we couldn't try it all. However, you MUST not forget to take the ice-cream!! The ice-cream is from Hadgen Daaz and there are about 4 varieties offered. I went for my favourite sencha (green tea). I believed I took about 6 scoops!! 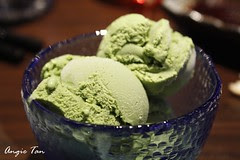 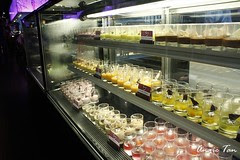 Towards the end of our gloriously satisfying meal, a waiter came with some grilled crabs legs courtesy of the Western chef. This came about 10 minutes before our 2nd hour was up..... We were quite shocked at their "generosity" but since we were a large party of 10 folks, they stand to gain an additional RM100 if we pass our 2-hour deadline... 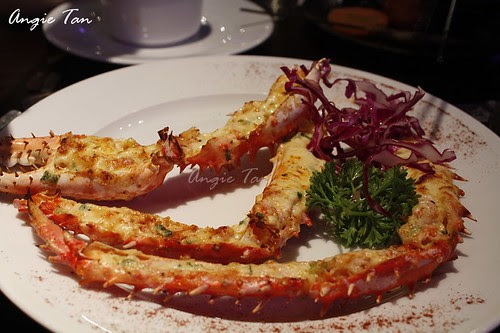 Well, we attacked the crab with gusto and managed to get to the payment counter just before our 2nd hour was up! *Phew*!!
The quality of the food at Tenji was excellent. It was really worth the $$$ spent. The after-promotion price tag of RM77 (for lunch) and RM88 (for dinner) can be a little steep. But if the quality of the food presented is fresh, tasty and varied; the price is worth it. I've been to Shogun and Saisaki previously and enjoyed my first experience there. However, after a couple of visits, the food quality drops, i.e. the cooked food is cold; sashimi and sushi slightly warm. In fact, some folks have told me that they were unfortunate enough to get food poisoning after visiting such outlets!
Some of my other colleagues who heard about our experience has been trying to book a place for lunch but apparently, the place is fully book right up to the end of the promo!! WOW!! Personally, I don't like crowds as you have to jostle for food/space as well as that innate "kiasuness" behaviour would emerge - making you take everything in sight because someone else is just grabbing as much as possible!
I will try to go again with my other friends and family to gauge the quality of the food and services after the promotion ends... By that time, I think my stomach would have "rebooted" itself and my wallet has gained a bit of cash again. ;-)
Note: More photos of Tenji can be viewed at my flickr site.
Posted by Angie Tan at 12:21 am